What would happen in the next 12 months if at least three students in your youth group became disciple multipliers?

So why don’t we focus more on making disciples who make disciples? Good question! That’s what Value #4 of a Gospel Advancing Ministry is all about—building and prioritizing your disciple multiplication strategy.

The Acts Approach to Disciple Multiplication

In the book of Acts, there were two types of spiritual movements, one obvious and the other under the surface. The obvious movement was seen when the apostles led hundreds, or even thousands, to Christ through their public preaching, as they did in Acts 2 and 3. The apostle Peter was a rock star after Pentecost and the power of the Holy Spirit emboldened him with the mission and message of Jesus. Good job, Peter!

But there’s more to the story—there’s another movement that was birthed at Pentecost and fills the rest of the pages of the book of Acts. And it’s exceedingly relevant to those of us who don’t view ourselves, or our students, as disciple-making rock stars, in the mold of Peter.

This second movement, although less obvious, had even more impact in advancing the gospel. We see it demonstrated during Paul’s time with the Thessalonians, and later with the Ephesians in Acts 19:8-10. The power of the second movement was exponential. It centered on people reaching their own peers with the good news and multiplying the reach of the message as the result of more and more disciples sharing the gospel in their relational circles of influence, until entire regions were saturated with the good news. The results are described in 1 Thessalonians 1:6-8:

You became imitators of us and of the Lord, for you welcomed the message in the midst of severe suffering with the joy given by the Holy Spirit. And so you became a model to all the believers in Macedonia and Achaia. The Lord’s message rang out from you not only in Macedonia and Achaia—your faith in God has become known everywhere. Therefore we do not need to say anything about it.

Are you leading this type of “second movement” with your teenagers?

Here are four steps you can take that will help you identify and cultivate Gospel Advancing student disciple makers.

Prayerfully identify three teenagers in your youth group who are/could be disciple multipliers.

Step 1: Identify Your Students with Discipling Potential. Pull out a roster of the students who typically attend your youth group. Then spend some time prayerfully considering who has disciple-making potential. Identify 2-3 students who Jesus impresses on your heart who you could see yourself (or another adult leader) investing in.

Step 2: Invite Them to Get in the Game. In order to make disciples who make disciples, your student disciple makers need to be disciples themselves. They can’t lead others where they haven’t gone themselves. Identify what you want this to look like in your youth ministry context. Will you disciple them yourself or match them up with another adult mentor so they can go deeper with God and develop the character traits and skill sets that will grow them into young leaders? Or you could create a Disciple-Making Group of students with a couple of adult mentors that meets apart from your full group. Based on whatever you think will work best in your own ministry context, settle on a plan. Then once you have an initial sense of what you anticipate disciple-making will look like, approach those students, individually or as a small group, and ask them if they would be interested in playing a discipling leadership role in your youth group.

Step 3: Disciple Your Student Leaders. Whether you do the discipling yourself, or delegate it to another adult leader, whether you use ready-made materials or come up with your own, your student discipleship leaders need to be taught how to follow Jesus by having someone pour into them. This is time outside of your regularly scheduled meetings. The goal is to guide them toward becoming a disciple multiplier themselves with their peers. As they wade into this process, help them identify 1-2 other students they can pour what they are learning into. Ideally, these would be students who they shared the gospel with and led to Christ themselves, but it can also be other Christian students in the youth group who are young in their faith. As they disciple their peers, be there to encourage, answer questions and, most importantly, pray for them. Then as their friends grow in their walk with Jesus, equip them to share their faith and start discipling their friends too, so that the process of making disciples who make disciples multiplies out.
What would happen in the next 12 months if at least three students in your youth group became disciple multipliers? Lord willing, you’d see radical gospel transformation taking root and multiplying out! Click To Tweet

Step 4: Improvise, Adapt and Overcome. View whatever approach you use to disciple your student leaders as a “Beta Test.” Take note of what works well and what doesn’t with this smaller group of students. Then improvise, adapt and overcome, as appropriate, as you move forward on this exciting and critical aspect of building a thriving Gospel Advancing Ministry.

Tapping into the potential of your students to disciple others not only extends your reach and multiplies your Kingdom impact, it provides these leadership-caliber students with disciple-making skills that will last them a lifetime. 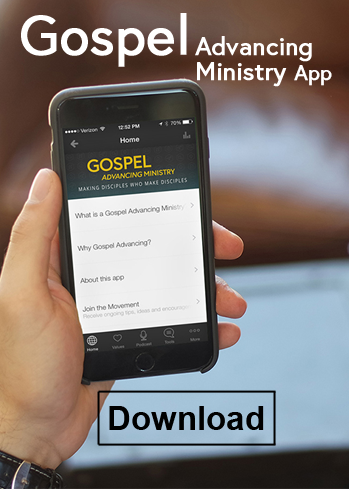 Connect with us on Social!

We would love to hear from you!